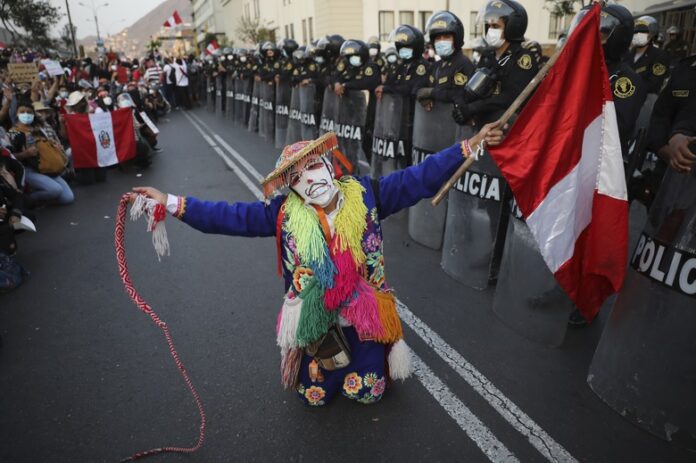 Peru rose on Monday morning searching for a new head of state after lawmakers failed overnight to name what would be the third president to lead the country in a week. Interim leader; Manuel Merino resigned on Sunday, after the ouster last week of his predecessor, centrist Martin Vizcarra, had sparked off protests and dragged the country into a constitutional crisis. The country is in the clutch of one of the world’s most lethal coronavirus (COVID-19) outbreaks and political analysts say the constitutional crisis cast the country’s democracy into jeopardy.

Martin Vizcarra was impeached by Congress on Monday over allegation of corruption and abuse of power. He left office immediately after the allegations. The corruption case against Mr Vizcarra has largely been based on leaked WhatsApp messages, which appeared to suggest his closeness to construction companies that allegedly paid bribes to win contracts in a region of southern Peru when he served as the governor. Martin Vizcarra has challenged his dismissal in the country’s Constitutional Court. He is still awaiting the ruling.

He was replaced on Tuesday by the head of Congress, Manuel Merino, who is expected to lead the country through to next April’s presidential elections. Prior to his impeachment, Vizcarra attempted to curb parliamentary immunity for lawmakers, angering the legislature. Half of the lawmakers in Congress are currently being investigated for their alleged involvement in crimes ranging from money laundering to homicide.

Peru’s legislature and executive branch have been at loggerheads since 2018, when a congressional majority led by opposition leader Keiko Fujimori forced then President Pedro Pablo Kuczynski to resign over corruption allegations. Kuczynski was replaced by Vizcarra, who was the then vice president.

Merino, who as president of the Congress led the impeachment, succeeded Vizcarra. But he too resigned, after two people died in protests against his fledgling government and lawmakers threatened to impeach him unless he stood down. Merino resigned Sunday after only five day in office, following days of protests.

Following Mr Vizcarra’s defeat, his supporters took to the streets in protest, and there were isolated clashes with the police. But Mr Vizcarra later appeared in public and accepted his defeat. His surrender calmed waters, but many Peruvians regard the impeachment as a coup and could be prepared to take to the streets again. International human rights groups, non government organizations have expressed concern about the use of force by police against protesters and the Organization of American States has called for Peru’s Constitutional Court to give clarity to the situation.

Congress is now seeking a replacement to march the country towards elections for April 2021. Lawmakers failed in a midnight vote to select the only name then put forward, Rocío Silva-Santisteban, a leftist human rights defender. The country’s vulnerable and unpopular legislature will vote again on Monday for the vacant presidential throne where another name will be on the table: Francisco Sagasti, a member of the centrist Morado party, a 76-year-old industrial engineer and former World Bank official.

Centrist lawmaker Francisco Sagasti was selected by Peru’s Congress as the country’s newest interim president on Monday, after a week of political unstability and displacement of balance that saw the resignation of two presidents. He will take country to the April 2021 elections till an elected government to be installed. Centrist Sagasti won 97 of the chamber’s 130 votes to clinch victory over his leftist rival, Rocio Silva Santisteban, who failed to secure the majority vote.

Sagasti’s appointment comes as Peruvian authorities struggle to cope with days of violent protests. The instability began on November 9, when Congress impeached former President Martin Vizcarra over corruption allegations. Vizcarra denies any wrongdoing and his impeachment sparked demonstrations across the country.

People waved the nation’s red-and-white flag and blared horns outside the gates of Congress as Francisco Sagasti of the centrist Purple Party was selected the legislature’s new president. The centralist member of the Morado party has not yet been sworn into office, but as head of Congress becomes the nation’s chief of state by default. Peru currently has no president or vice president, making him next in line.

Many in the Latin American nation are hopeful that Sagasti’s appointment will mark the end of a tumultuous week in which thousands took to the streets outraged by Congress’ decision to oust popular ex-President Martín Vizcarra. During the upheaval, two young men died and dozens were injured. Peru also spent more than 24 hours with no designated chief of state. Human rights groups accused police of mounting an excessive response to the protests, lashing out at demonstrators with brutality; rubber bullets and tear gas. The two protesters who died suffered multiple wounds

Sagasti could steer the country back toward stability because he is in a stronger position than his predecessor to potentially win the support of both Congress and demonstrators. He and his Purple Party bloc were among just 19 of 130 lawmakers to vote against Vizcarra’s removal. That will earn him credibility among protesters who condemned the ouster as a power grab. Unlike Vizcarra, he also has a party in Congress representing him. Sagasti inherits a broken economy, hit hard by the coronavirus pandemic. Peru also has the world’s highest per capita death rate from the coronavirus.

There is a political immaturity from some and a lack of self-awareness from others in the face of what has happened in the country from what world has seen through a week. The main thing for Peru is to regain stability and for this nightmare to end. Amid the uncertainty, Peru’s markets and currency have come under pressure.

Bonds rose, and then fell early on Monday. The pressure has been extered from all over the world especially EU, Joint States of America to curb the situation. A country cannot afford to change its president 3 times in a week. Will the citizens of Peru be able to absorb Sagasti as their new interim President or we will see third president lining to sit on the throne? Time will tell.