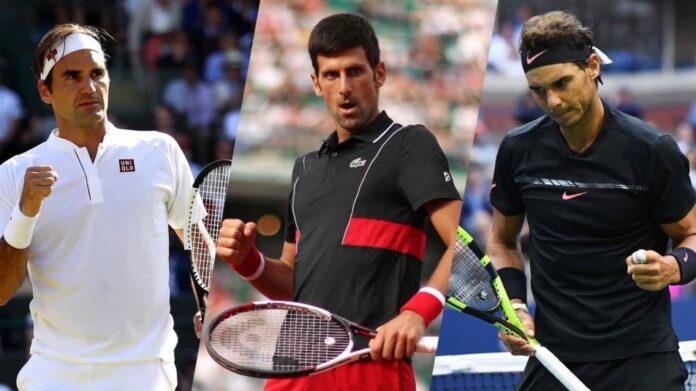 When Pete Sampras retired in 2002 with 14 Grand Slams, there was no one near him. Sampras could have played for few more years, as he was only 30, but he probably thought his record would have safe for few more decades. Because when Sampras broke the record of Roy Emerson, the Australian had held the record for 3 decades.

But 18 years and 72 Grand Slams later, Sampras sits on 4th place in the list of most grand slam winners. Three players, who had 0 grand slams when Sampras retired, Roger Federer, Rafael Nadal and Novak Djokovic have won 57 out of 72 grand slams since his retirement, even though two of them had not even turned professional when Sampras played his last match against Andre Agassi at 2002 US Open final.

Roger Federer and Rafael Nadal have won 20 Grand Slams each, whereas Novak Djokovic has won 17. But there is not much to differentiate between them, as all of them are contenders for the Greatest of All Time (GOAT) debate now.

Roger Federer was first one to stun the Tennis world when he defeated Pete Sampras on his favourite ground, the centre court of Wimbledon. Sampras was unbeaten at Wimbledon since 1996, winning 4 titles and 31 matches in a row. But then Federer happened and spectators witnessed one of the best matches in the history of championships. It was the shifting of guards, and Federer won in 5 sets.

When Federer won 3 Grand Slams each in 2004, 2006 and 2007, he had reached 12 Grand Slams only 5 years after Pistol Pete’s retirement. He was only 26 and it looked like he would go on to win at least 25 Grand Slams. At that time, no one would have thought that Federer would be competing at top level even in 2020 and would have only 20 Grand Slams.

The Spaniard from Mallorca, dominated the clay court more than anyone had dominated any particular surface in the history of Tennis. The “King of Clay” title was used for Guillermo Vilas, Thomas Muster, Juan Carlos Ferrero and others in the past, but none of them came close to Rafael Nadal, who won 13 French Open finals, 4 of them against Roger Federer. Above all, Nadal overcame dozens of injuries in his career and many times it looked like he would not come back. But he bounced back strongly and defied all the odds.

Novak Djokovic was the player who stopped Roger Federer many times on his favourite surface and tournament Wimbledon. The Serb defeated Federer in the final of Wimbledon 3 times in 2014, 2015 and 2019. The last defeat hurt the fans of Swiss maestro the most, as he had 2 match points in the fifth set but could not convert them. He eventually lost 13-12 in the last set tie-break.

The Serb achieved, which was not matched by Federer or Nadal, in fact no one had done that since Rod Laver in 1969. From Wimbledon 2015 to French Open 2016, he went on to win 4 Grand Slams in a row. This was something which made Djokovic a main character in the GOAT debate, as he had been playing a supporting role in the story of Roger Federer and Rafael Nadal before that.

Novak Djokovic may have 3 Grand Slams less than his rivals at the moment, but he is 1 year junior to Nadal and 5 years younger than Federer. Despite being on tour for lesser time than other two, he has finished World No. 1 for 6 years, whereas Nadal and Federer have done that 5 times each.

If we talk about ATP Masters 1000 tournaments, which were previously known as Tennis Masters Series, Andre Agassi was on top with 17 titles until 2010, but now Rafael Nadal and Novak Djokovic have won more than double of Agassi’s titles. Novak Djokovic is sitting on top with 36 titles but Nadal has only 1 title lesser than him. The Spaniard can easily overtake him in clay court season, as he has won 25 of his 35 titles on his favourite surface.

Another way in which Djokovic is about to go on top is, in the list of players who have remained World No.1 for the longest period. The Serb has been on the top of rankings for 296 weeks now and has to occupy the top spot for just 15 more weeks to break Roger Federer’s record of being top player of the world for longest time period. Roger Federer had occupied the top spot for 310 weeks whereas Rafael Nadal had this honour for 209 weeks.

The stats may change as Rafael Nadal would be favourite to win French Open once again as the tournament is only 6 months away and the Spaniard does not look to be slowing down for now. Although Dominic Thiem may give Rafael Nadal some challenge at Roland Garros, but despite beating Nadal on Clay 4 times, Thiem has won only 1 set against Nadal in 4 meetings at Roland Garros, two times in final.

On the other hand there are many challengers for Novak Djokovic, on his favourite surface, the hard court. The Serb was beaten by Dominic Thiem in the ATP World Tour Finals and Russia’s Daniil Medvedev has also challenged him on some occasions. Alexander Zverev, Medvedev and Thiem are going to be hard for Djokovic to beat at Australian Open.

Nadal and Federer would also be back in Melbourne so it is going to be a very exciting start to the New Year. The Big three, already in the twilight of their career, may have a year which will decide when they are going to quit. The youngsters like Medvedev, Zverev and Thiem may also have a say with their performance, telling the legends that it is their time to retire.