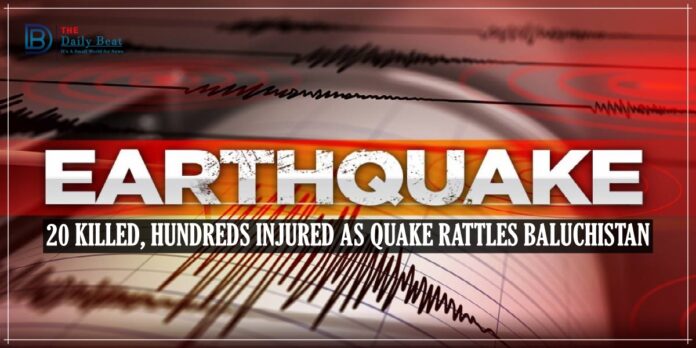 A huge earthquake struck several sections of Baluchistan early Thursday morning, killing at least 20 people and injuring more than 300 others. Aftershocks are still being felt in various regions following the quake. The first tremors were felt at 3:20 a.m., prompting scared residents to rush out of their homes, reciting kalma and verses from the holy Quran. In the impacted districts, relief and rescue efforts are underway, and all hospitals have declared an emergency.

The majority of those killed are minors, according to the Provincial Disaster Management Authority (PDMA). In Baluchistan, the quake hit Quetta, Sibi, Harnai, Pishin, Qila Saifullah, Chaman, Ziarat, and Zhob. The magnitude of the earthquake was 5.9 on the Richter scale.

The earthquake had a depth of 15 kilometers and was centered near the province’s Harnai region, according to the National Seismic Monitoring Centre.

The injured, including women and children, have been transferred to Harnai’s District Headquarters Hospital, he said.

The relief and evacuation measures were underway, announced by Baluchistan Chief Minister Jam Kamal Khan Alyani. “Everything is in place, including blood, ambulances, emergency aid, [helicopters], and rest. Every department is working on it “He tweeted about it.

PDMA Director General Naseer Ahmed Nasir told Geo News that landslides had occurred in mountainous areas. According to Home Minister Mir Ziaullah Langove, five to six districts were hit on a “large scale,” and data was still being gathered.

President Dr. Arif Alvi has conveyed his pain and sorrow over the deaths in the Harnai, Baluchistan, earthquake. In a tweet, he expressed his condolences to the grieving families and prayed for the souls of those who had died.

He prayed for the quick recovery of those who had been injured. President Arif Alvi expressed confidence that the national and provincial disaster management institutions will provide immediate assistance to those in need.

Pakistan is situated on the Indus-Tsangpo Suture Zone, about 200 kilometers north of the Himalaya Front, and therefore crosses the Indian and Eurasian tectonic plates, making this area highly prone to earthquakes. The Himalayan area has the greatest seismicity and the largest earthquakes, which are caused mostly by movement on thrust faults. In recent years, the nation has been hit by several earthquakes. One of the country’s deadliest earthquakes in recent years occurred on October 8, 2005, killing roughly 74,000 people.

Earthquakes, in reality, are unpredictable. The USGS or any other scientist never forecast a big earthquake. We do not know and do not anticipate learning any time soon. The USGS can predict only the probability of a big earthquake happening in a certain region during a given time period.

Governments and the general people, on the other hand, may plan for such disasters to reduce the severity of the damage.

Every household, government agency, and company must be aware of the tectonic risks presented by the structures they occupy, the transportation networks they depend on, and the utilities that serve them, as well as the measures they may take to protect themselves. They must be self-sufficient for at least three days (72 hours) after a disaster.

Netizens and governments must collaborate to ensure that special needs and vulnerable populations get appropriate responsive care. Government organizations, significant businesses in the area, and earthquake experts must work together to prepare the region to react to and recover from major earthquakes. This may be done via multi-organizational regional planning, training, exercises, and coordination evaluations, as well as continuous advances in our collective knowledge of seismic risks.

We hope that the government begins to focus on raising public knowledge regarding environmental disasters. We also pray for the wounded to recover quickly and for the souls of those who perished in the earthquake to rest in peace. 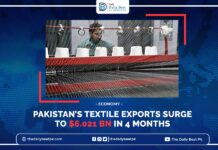 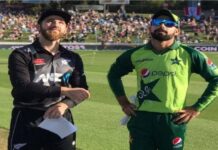