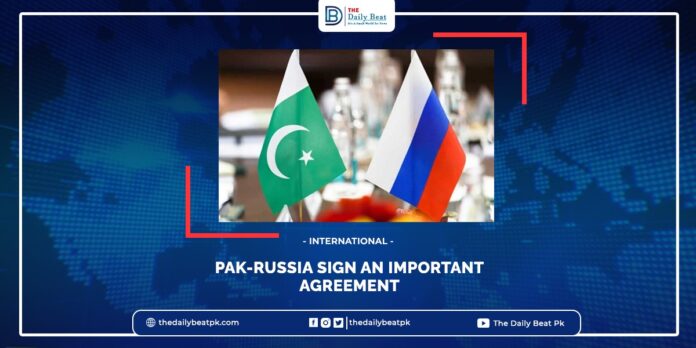 ISLAMABAD: Under the auspices of a new regional and strategic partnership, Pakistan and Russia are set to usher in a new era of economic cooperation in vital sectors of the economy, including information technology (IT), agriculture, power, petroleum, railways, water, and commerce. This is a significant development.

According to media reports, both countries are expected to sign some significant agreements in Russia today (Friday).

“Both nations are expected to enable direct flights between their respective countries through Dubai, and considerable progress has already been made between the Russian Federal Air Transport Agency and the Pakistan Civil Aviation Agency in this regard,” the statement said. “Russia has also shown a strong interest in extending its knowledge and investing in the production of new locomotives for Pakistan’s railroads,”

Russia and Pakistan have agreed to increase their cooperation in the fight against terrorism.

Over the course of the three-day discussions, Russia and Pakistan looked at ways to expand bilateral commerce in order to reach the potential of $70 billion by 2020. The value of Russian-Pakistani commerce climbed by 45.8 percent in 2019 compared to the previous year, reaching $789.8 million.

Currently, negotiations between Pakistan and Russia are taking place under the auspices of the Inter-Governmental Commission (IGC) on Trade, Economic, Scientific, and Technical Cooperation.

Umar Ayub, the Federal Minister for Economic Affairs and Development, is heading the Pakistani delegation to Russia. A 16-member team from diverse sectors of the economy is also in Russia to conduct business-to-business discussions with business people.

Additionally, Moscow and Pakistan are in discussions for a Shareholders Agreement for the $3 billion Pakistan Stream Gas Pipeline (PSGP) project, and sources believe that a shareholder agreement might be reached by the end of December or the beginning of January. The group from Pakistan also paid a tour to the TMK pipeline production plant, which will be utilised in the Pakistan Strategic Gas Pipeline (PSGP) project. Pakistan, as well as in supplying gas to the country, according to the sources.